Spread the word by sharing these graphics to social media. 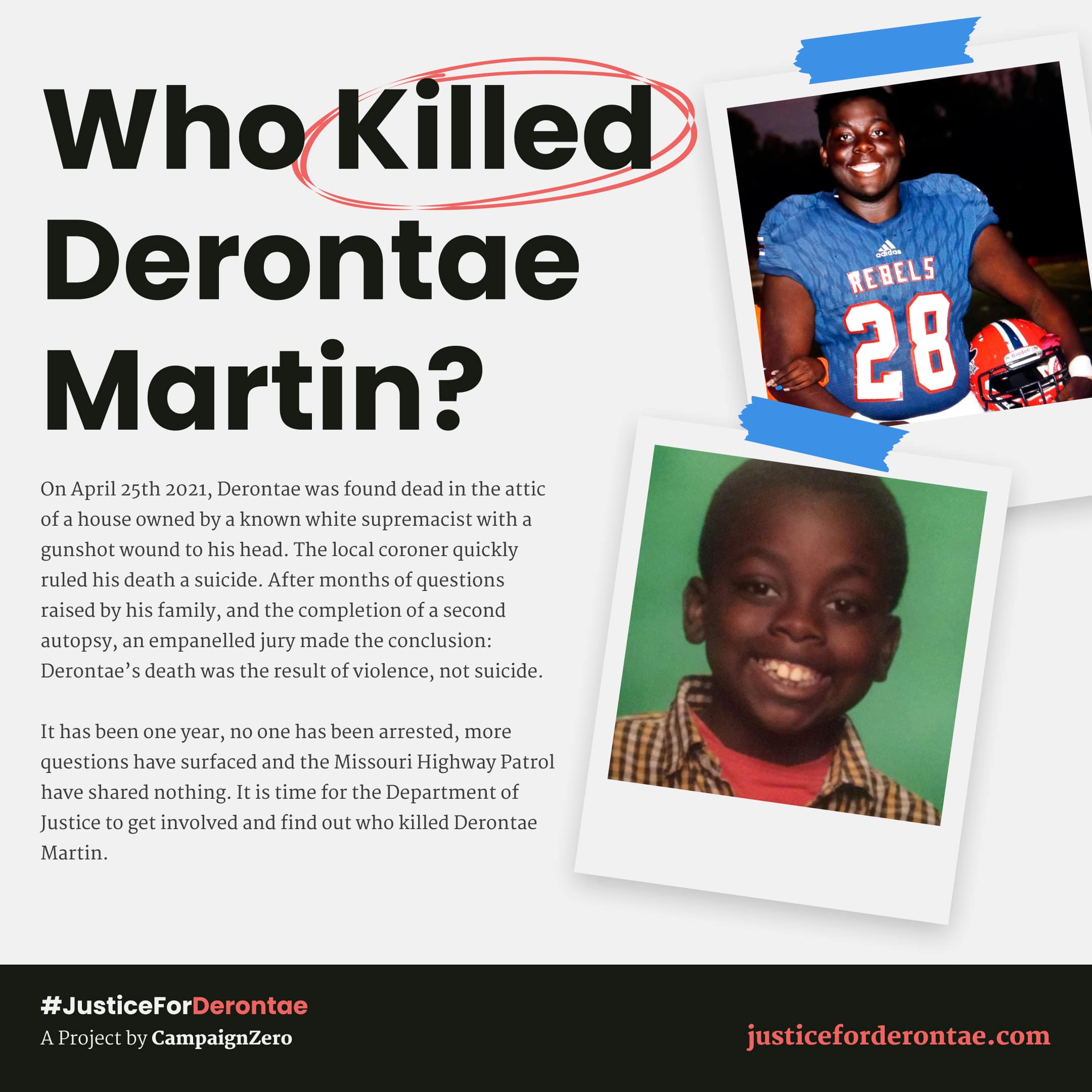 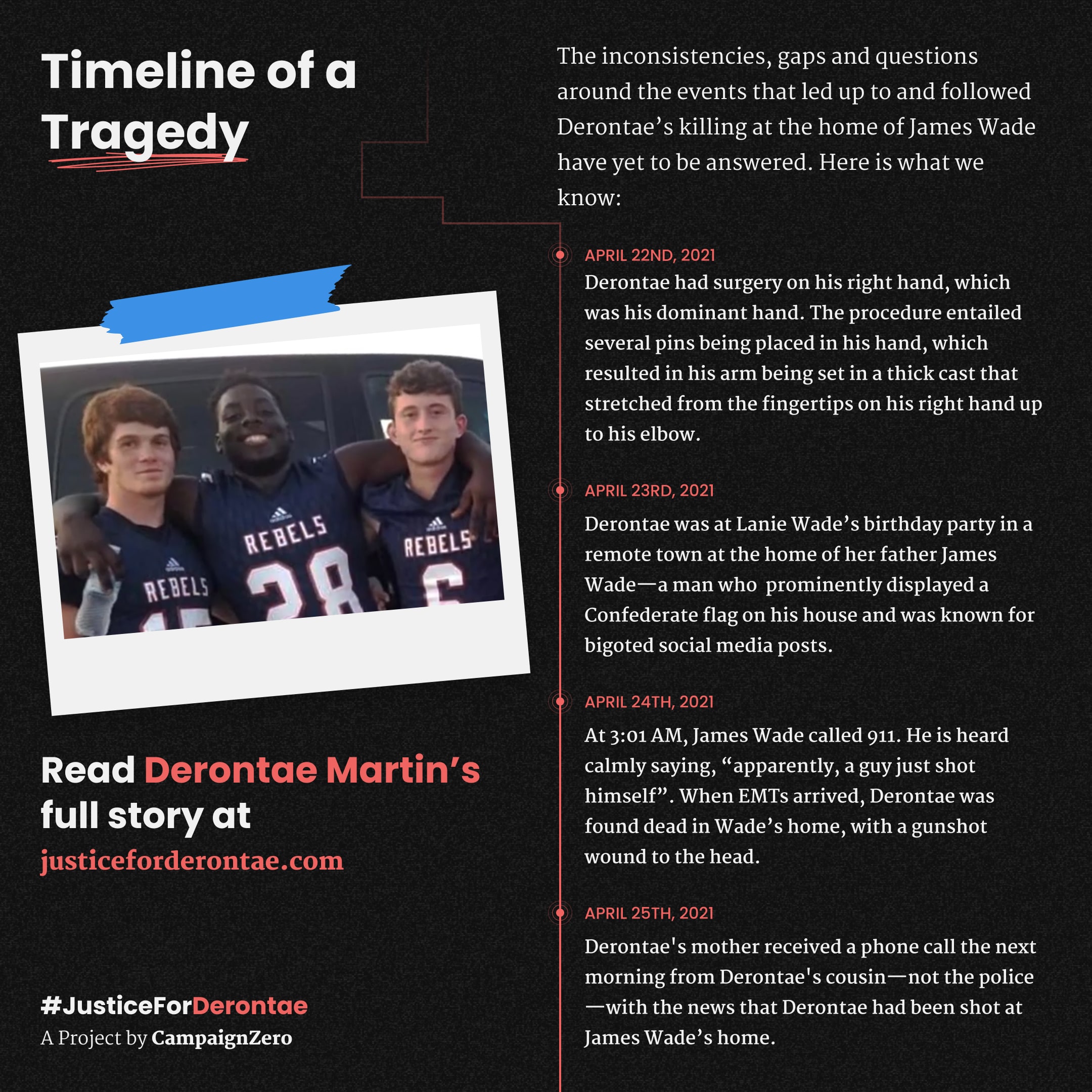 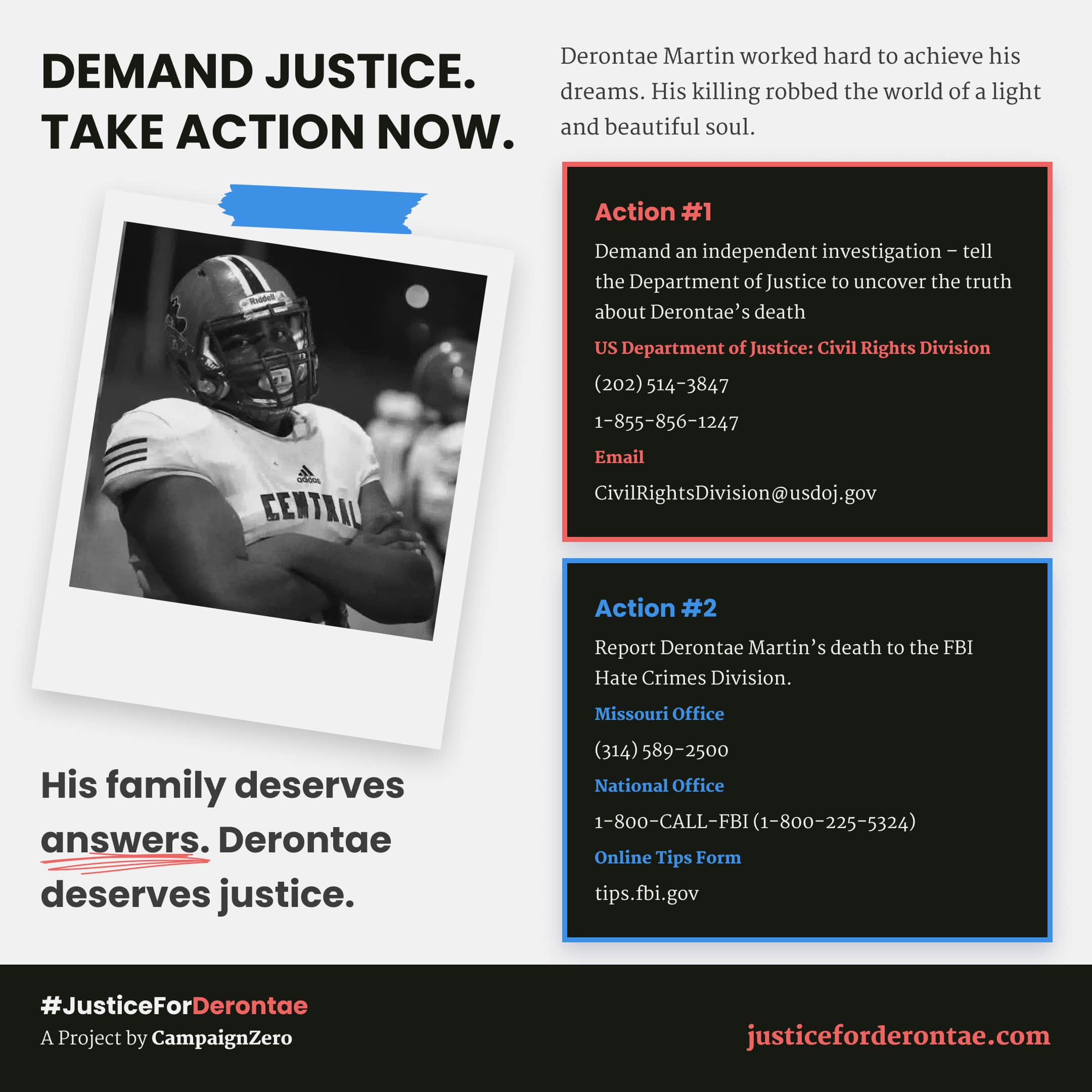 On April 25th 2021, Derontae was found dead in the attic of a house owned by a known white supremacist with a gunshot wound to his head. The local coroner quickly ruled his death a suicide. After months of questions raised by his family, and the completion of a second autopsy, an empanelled jury made the conclusion: Derontae’s death was the result of violence, not suicide.

It has been one year, no one has been arrested, more questions have surfaced and the Missouri Highway Patrol have shared nothing. It is time for the Department of Justice to get involved and find out who killed Derontae Martin. 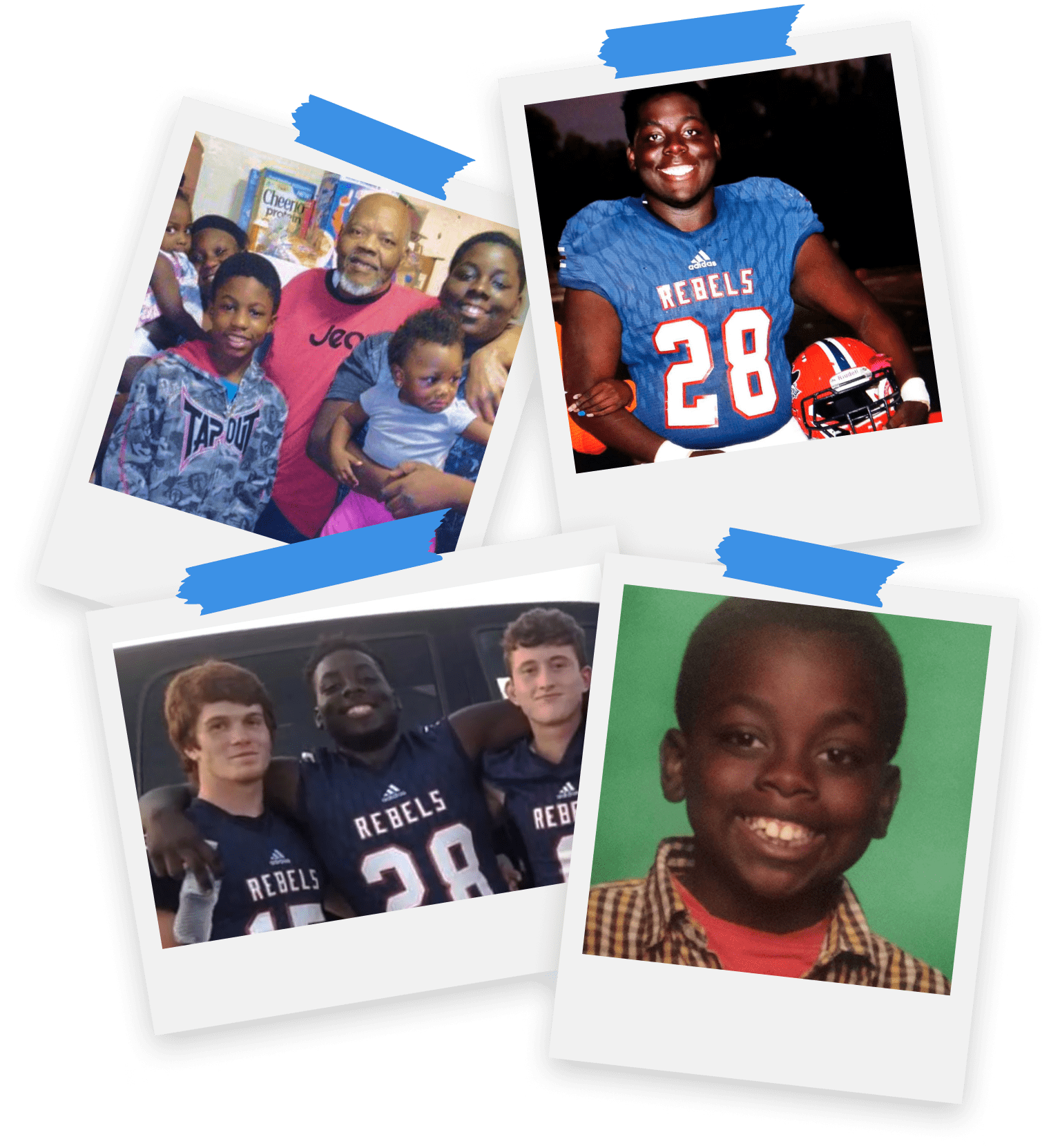 Timeline of a Tragedy

Derontae was a loving 19-year-old, caring brother, supportive teammate, and hard-working student. Derontae was killed just as he was about to live out his dream of playing college football. To those who knew him, the news of his death by suicide was both jarringly tragic and suspicious. The inconsistencies, gaps and questions around the events that led up to and followed Derontae’s killing at the home of James Wade have yet to be answered. Here is what we know:

April 24th 2021
Derontae was at Lanie Wade’s birthday party in a remote town at the home of her father James Wade—a man who prominently displayed a Confederate flag on his house and was known for bigoted social media posts.

April 25th 2021
At 3:01 AM, Wade called 911. He is heard  calmly saying, “apparently, a guy just shot himself”. When EMTs arrived, Derontae was found dead in Wade’s home, with a gunshot wound to the head.

April 25th, 2021
Derontae's mother learned of his death the following morning from other family members—not the police.

April 26th 2021
A local coroner conducted an autopsy and concluded that his death occured by suicide.

April 27th, 2021
Having still not heard from law enforcement directly, Derontae's mother reached out the the sheriff's department for information about her son's death. She was met with hostility and given no information.

May 11th 2021
The family of Derontae Martin ordered a second, independent autopsy. The findings were released and noted several inconsistencies from the initial autopsy.

May 2021
James Wade continued to comment on social media regarding Derontae’s death and texted someone stating that Derontae Martin was the second person to die from “suicide” at his home.

july 30th 2021
Given the number of inconsistencies in the case, a jury was empanelled to review the coroner reports and review the facts. By July 30th, the jury determined that Derontae Martin’s death was the result of violence, not suicide.

April 14th 2022
James Wade was arrested, and is being held in custody, for a shooting incident he was involved in unrelated to Derontae Martin’s case.

Today
No one has been arrested in connection with Derontae’s death, more questions continue to surface and the Missouri Highway Patrol has shared no updates. It is time for the Department of Justice to lead a thorough investigation and find the answers his family and community deserves.
Share His Story 
His family deserves answers. Derontae deserves justice. Get involved. 

A Web of Falsehoods

We know that Derontae was taken to Lanie Wade's birthday party on April 24th, 2021, in Fredericktown, MO, at her father, James Wade’s home. But details about what happened at the party and the events that followed remain unclear.

James Wade, who is known for prominently flying a Confederate flag and bigoted social media posts, called 911 and calmly claimed Derontae shot himself. The call also picked up other voices. The following could be heard during the call:

A Rushed Autopsy & Suspicious Cause of Death

Several days after his death, Derontae’s mother was told by the Madison County Sheriff's Office/Coroner that they had conducted an autopsy and the cause of death was suicide. They concluded the gunshot wound was self-inflicted and fired at close range.

Derontae’s mother, who had not been notified about an autopsy before it was completed, was suspicious. Derontae’s right hand was in a cast and arm in a sling, making it impossible for him to hold a gun with his dominant hand. Aside from the physical questions, she also knew her son was also looking forward to his future, excited about going to college and playing football. She ordered a second, independent autopsy.

The second autopsy revealed inconsistencies from the first examination, and as a result, a jury was empanelled to review the case.

It took just a few hours for the jury’s ruling. Derontae’s death resulted from violence, not suicide.

No arrests have been made. According to testimony before the jury, a witness testified that James Wade confessed to killing Derontae. “He just told me he didn’t like Black people and used the N-word,” Phillip Lawler testified. He said Wade told him “that murder was the easiest thing in the world to get by with.” The Missouri Highway Patrol is investigating and refusing to answer any questions —the same police who were part of the initial investigation that attempted to sweep Derontae’s death under the rug by backing the local sheriff’s claim it was a suicide.

Read the news articles covering the case below: 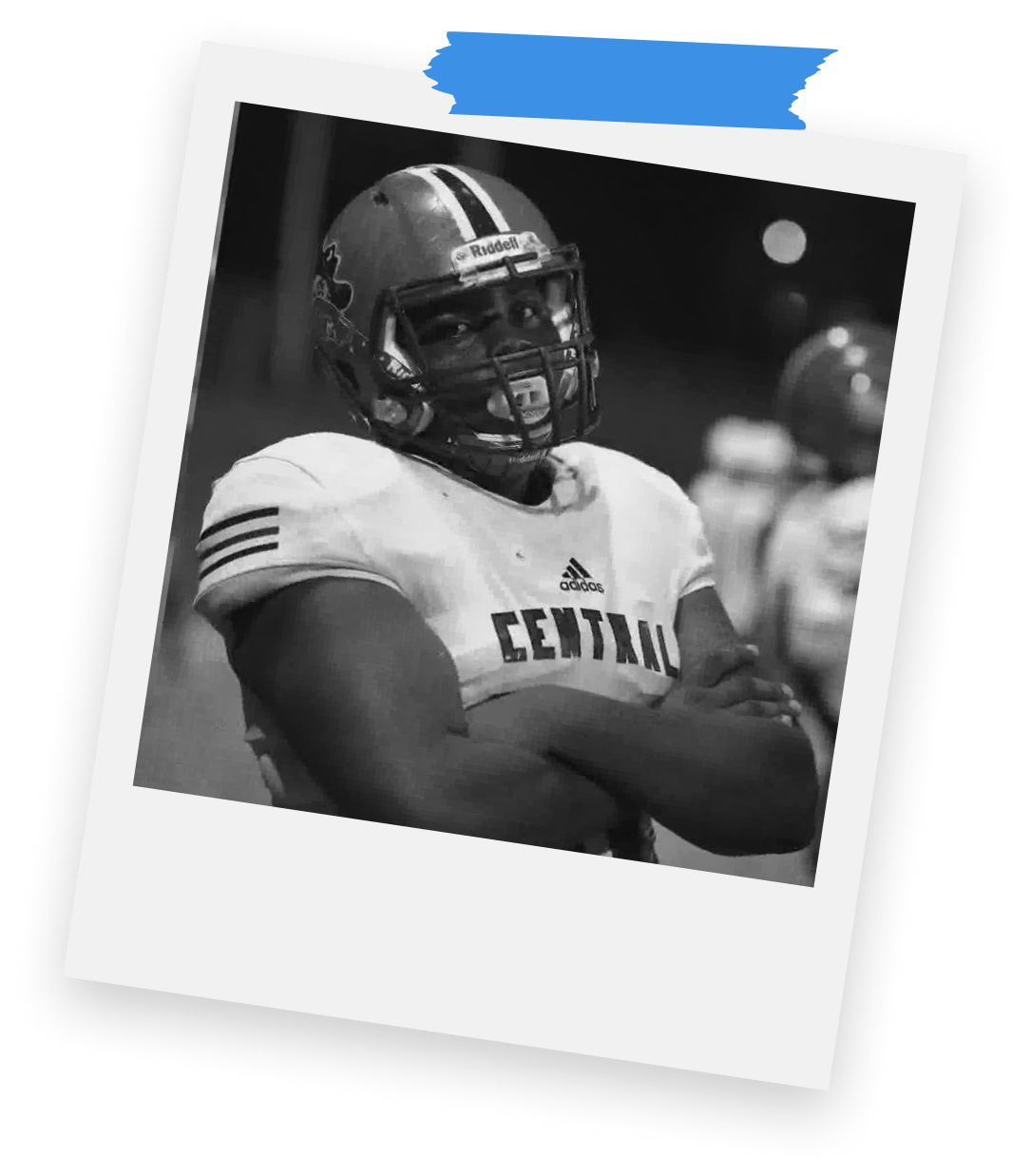 Derontae Martin worked hard to achieve his dreams. He brought up his grades to play on the football team. He supported his siblings. He worked at Walmart and a restaurant to save money for college, where he would continue to play the game he loved. His killing robbed the world of a light and beautiful soul.

There are so many questions and inconsistencies about what happened. The Missouri Highway Patrol has provided no updates or information about their investigation. We believe the Department of Justice can conduct a thorough investigation and find the answers his family deserves. Together, we need to uncover the truth.

Demand an independent investigation – tell the Department of Justice to uncover the truth about Derontae’s death.